Reference found so far is in the Wingham Division Ale Licence list, which shows the “Black Robin,” Kingston, to be re-licensed for the sum of 8 shillings in 1740 indicating that the pub was present before 1740.

The “Black Robin” Public House stands at the gateway to the village of Kingston in Kent. Legend has it and many are thought to believe that it is named after a highwayman. But the term ‘Black Robin’ actually comes from the old Kentish slang for ‘highwayman’. Basically similar to the Cockney slang ‘Tea Leaf’ (Thief). The “Black Robin” pub was used by smugglers and a network of other smuggling gangs as well as highwaymen. The most notorious of all being The Aldington Gang who operated from 1820-1826. They used local pubs to drop off their goods where they would then be sold to people within the community at a price but without the heavy tax. Goods would be unloaded from the Deal, St. Margaret’s Bay area and down onto the Romney Marshes. The leader at the time was Cephas Quested who was doing quite well until he and two other gangs were involved in a battle with Customs men (Preventivemen) at the Battle of Brookland in February 1821. The battle took place when the gangs were caught unloading, they still managed to load up their goods while fighting and scatter across the county. Cephas Quested in the confusion of battle turned to a man near him, give him a musket and told him to ‘Blow the officer’s brains out’.

Unfortunately for him, he mistook the man as a colleague and instead turned to Richard Morgan, a midshipman of the blockade force who promptly turned the gun on Quested. Cephas was tried at the Old Bailey on April 17th and later hung at Newgate Prison on 4th July, 1821. George Ransley took over as leader of the gang, he had excellent organisational abilities. According to legend, George was a Ploughman/carter. It is also said that one night there was a fight between gang members, leading to one of their members being murdered in the “Black Robin.” He dragged outside and left on the road. Locals of the area and passers by have been witness to the sound of groans, possibly from the murdered gang member but no-one knows for certain. Many incidents have happened at this junction over the years and the eerie sounds that can sometimes be heard, could be from any number of sources. George Ransley and his gang were eventually caught on 4th July, 1826 on the beach at Dover.

Ironically five years to the day Quested was hung. Richard Morgan the midshipman was killed and Ransley was arrested on suspicion of the murder. If found guilty, the charges carried the death penalty but their lawyer, a local gentleman from Maidstone, got the sentences reduced to transportation to Tasmania or Van Dieman’s Land as it was known then by Europeans, because the crime had occurred in the dark and the actual circumstances were difficult to prove. George proved an excellent farmer, a good administrator, was granted a conditional pardon on 22 June 1838. His brother-in-law (Samuel Bailey) was also on board the same ship (Governor Ready) as was fellow gang members Thomas Gillham and James Hogben. Ransley was given 500 acres of land and his wife and ten children were allowed to sail out to join him. He farmed at River Plenty, Hobart. He died there in 1856. 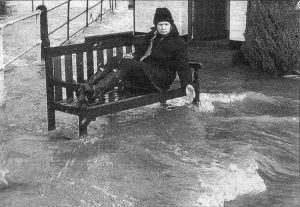 Licensee Jill White in 2001 (above) takes refuge from the white-water rapids of the Nailbourne as it races past her “Black Robin” pub at Kingston. Ms. White, was optimistically showing a “business as usual” sign.
Her pub had been marooned in flood water since November 2000, but the latest deluge was the worst.