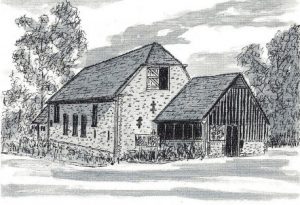 Kingston Barn has its origins in the 18th Century as a tithe barn owned by the Church. It is constructed of ‘clunch’ blocks ie. chalk, faced on the outside by knapped flints and red bricks. From the sketch it is possible to discern the original arrow-head windows when it was used for the shelter of animals, and the upper window-space in the gable end contained a hoist for lifting supplies. Between 1816 and 1852, the then Rector sold the barn to Lord Conyngham and it was attached to Kingston Court Farm.

As World War 1 ended in 1918, Canon Potts was installed as the Rector of Kingston and remained in post until his retirement in October 1939. During that time, he became a major benefactor to the parish and village. Having bought the Barn with the adjoining field, he and his sister donated it to the Church and Parochial Church Council in 1931 for use as a communal building. The two of them paid for the work carried out to make it suitable for village activities, including larger windows, heating and lighting, and the addition of an entrance porch. ‘We hope it (The Barn) will supply a real need (for the village) and enable our people to see more of each other’. The adjoining Barn Cottage was also built and its rent still goes towards the upkeep of the Barn.

From the 1930s until the end of the 20th Century, the Barn was used for social events, sports activities, meetings and other gatherings. As the Millennium approached, grants from the National Lottery, other Trusts, Canterbury CC and KCC provided the resources for a major renovation. The vision of what could be achieved was largely driven by John Gilbey, a Parish Councillor and Tom Bellamy, a skilled local architect. The old roof was re-tiled and insulated, new wooden flooring and new wooden window frames, eventually with shutters, were added. A mezzanine floor with balcony, accessed by a new staircase provided additional floor space. The old porch was removed and reconstructed to accommodate refurbished cloakrooms; more efficient heating and lighting and a new kitchen all helped to transform the cold dark barn into the stylish, distinctive building we enjoy today. The most recent change carried out between 2014-17 has been a small extension to create a larger kitchen with enhanced facilities. This was officially opened in December 2017.

Today, The Barn is a popular venue for meetings, local clubs and societies and other social activities and is available for hire for a variety of functions. Although ‘de facto’ The Barn is Kingston’s Village Hall, it will always be known as ‘The Barn’ to reflect both its origins and the enormous generosity of its benefactors. Since 1998, it has been managed by a charitable Trust of elected and nominated Trustees, assisted by a Management Advisory Committee, who represent the Barn users. 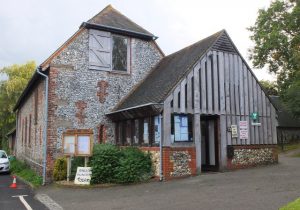