Kingston and the railway
The 16-mile Elham Valley Railway line was constructed by the South-Eastern Railway Company (SER) between 1884 and 1889 to link Folkestone and Canterbury. It was constructed in two sections, a southern section from Folkestone to Barham which opened on 1st July 1887, and a 7 mile section from Barham to Canterbury completed by July 1889. The route of the line follows two river valleys, the Seabrook flowing south and the Nailbourne stream flowing north from Lyminge. The watershed at Etchinghill was crossed by a tunnel combined with long approach cuttings. The southern section of the line closely followed the valley floor on virtually level ground. Construction of the second section from Barham to Canterbury was continued some 15 metres above the valley floor of the Nailbourne by means of a lengthy embankment on the north-facing valley side through the parishes of Barham, Kingston and Bishopsbourne, then through the Bourne Park Tunnel, across the River Stour and on into Canterbury to the Harbledown Junction.
In November 1888, the Folkestone Chronicle reported that ‘the construction of the long and rather lofty embankment from Charlton Park to Barham has been completed …… and the embankment is being rapidly prepared for the permanent way’ (ie. the steel railway track). The height of the embankment was almost 60 feet (20 metres) and crossed Covet Lane by a substantial brick arch and Kingston Street by a steel girder bridge (now demolished). Built of chalk quarried largely from tunnels and cuttings elsewhere and constructed to main line standards, the line finally closed in 1947. Today, the embankment together with Covet Lane Bridge, provides the most substantial reminder of the route of the old Elham Valley Railway.
Three heavy rail-mounted guns were deployed on the Elham Valley line. The railway route followed a meandering course, enabling the guns to be trained by moving them along the line to a suitable location. The wooded landscape also gave cover. The heaviest gun was an 18-inch (460 mm) device nicknamed the “Boche Buster”. It was stationed at Bourne Park and could be stood down in the tunnel, avoiding enemy attack. The gun could fire a 6-foot (1.8 m) 1.75-ton shell up to 12.5 miles (20.1 km) and was capable of reaching Pegwell Bay near Ramsgate. The other two guns were deployed to Elham and Adisham respectively.
The gun was first fired on the morning of 13 February 1941, when the equipment was towed to a stretch of track near Kingston for calibration tests. Several rounds were fired out into mid-channel; the results were sighted and marked by observation posts on the cliffs at Dover. In the Kingston and Barham area villagers were warned to open doors and windows, but the blasts were so severe that in many cases houses were damaged. The gun was fired on only two other occasions, shortly after the first; one at the World’s Wonder bridge between Barham and Elham and the other at Lickpot bridge, Elham. 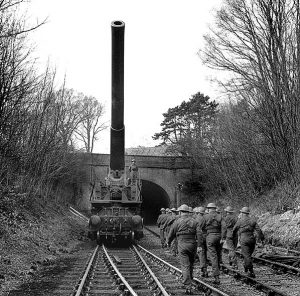 Acquisition by Kingston Parish Council
In 2005, Kingston Parish Council purchased with the aid of a grant from Canterbury City Council, a 300m stretch of the old embankment between Covet Lane and King George V playing field on The Street, as a public amenity. Since the closure of the EVR, there had been very little management of the area (815m²) and spontaneous growth of mature trees, saplings and undergrowth now make the need for substantial tree management a priority. Steps, ramps and railings at 4 points were constructed in 2012 to provide easier access. The embankment is now a popular, much used designated footpath (CB542) within the AONB, linking with other footpaths to provide circular walks.

Current state of the Embankment
The spontaneous growth of trees since the 1950s has resulted in a wide variety of mature trees, including sycamore, yew, beech and occasional oak trees. Some are of poor quality, but most are in fairly good condition, although 80% have ivy growing up them. There is also dense undergrowth of brambles and more ivy. Technical inspection in 2012 revealed that the number of dangerous trees is small, but the cost of removing these when they fall is unpredictable and costly. As landowner, the Parish Council bears the responsibility of maintenance costs over the whole area and receives no funding from any other source. PWR (Public Rights of Way) only contribute if fallen trees block the public footpath. Further technical advice and assistance during 2016-17 has been provided by The Kent Men of the Trees and The Forestry Commission and this has been fed into a 5-year management plan.
Aims of the Embankment Project
i. To establish a programme of regular tree maintenance.
ii. To create a body of trees in good order, through the removal of dead and poor quality trees and replacement with better quality native species.
To develop the area owned by the Parish Council as a local asset for recreation, appreciation of the wildlife, and recognition of its significance in the cultural heritage of this part of East Kent.